It has been reported that Julian Speroni has signed a new one-year deal with Crystal Palace. 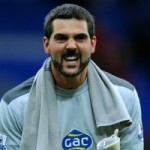 Having seen some speculation he would be leaving Selhurst Park, the 35-year-old was delighted to have committed his future to the south-east London club, who completed a revival under Tony Pulis to finish in 11th place last season having come up via the Championship play-offs.

“This is my home. This is where I always wanted to be, so I’m really pleased,” Speroni said to the club’s official website, cpfc.co.uk.

“I have been saying for months and months this was always my first choice.

“I am really pleased we can forget about what happened, deal with it and look forward to next season now.

“The expectation will grow as long as we stay in the Premier League, but we are going to do our best, of course, try to stay in the league again and finish as high as we can.”