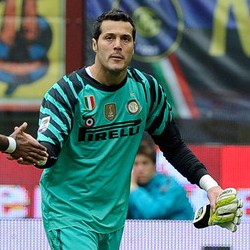 Julio Cesar has has declared that he is happy at Inter Milan despite rumours linking him with summer shifts to Manchester United and AS Roma.

The 31 year old Brazilian international was being linked with a San Siro departure but recent comments suggest that he will remain in Italy at least for a little while.

The former Flamengo goalkeeper told La Gazzetta dello Sport : “It’s true that Roma were interested in me. They sent out some feelers, but I decided to stay at Inter until my contract expires in 2014,”.

“I want my name off the transfer market pages. No links with Roma, no Manchester United, nothing. There is no story.

“I have no intention of leaving the Nerazzurri, because in August I want to beat Milan in the Italian Super Cup and then take back the Scudetto,” he added.

“Before 2014, I want to lift the Champions League again. The truth is I have the enthusiasm of a child and am determined to start for Brazil in the World Cup we host in 2014. To achieve that, I need to keep winning for Inter, so I’m hunting for another treble.”

Douglas Maicon Linked With A Move To Anzhi Makhachkala