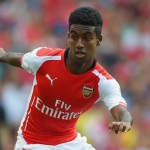 Reports have emerged claiming that USA coach Jurgen Klinsmann has made it clear he wants Arsenal whizkid Gideon Zelalem to commit to the Stars and Stripes.

Zelalem also qualifies for Germany and has been capped at youth level by the world champions.

“He is a special case. He is already ready to play at the senior level, I think,” Klinsmann declared.

The midfielder, 18, does hold a US passport and played his junior soccer in Washington.

But he needs to spend five years in the US to qualify for the national team. Klinsmann is hoping for a waver from FIFA.