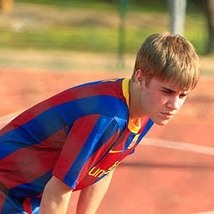 Justin Bieber has had trials with Barcelona – sort of!

In Spain as part of his European tour, the teenage sensation admitted that he is a big Barca fan and actually trained at La Masia during the week.

Bieber missed Barca’s Champions League win over Shakhtar Donetsk, but was invited to the club’s training complex for a kick-about.

Barca first teamers Bojan Krkic, Thiago Alcantara and Alberto Fontas all took part in a pick-up game with Bieber and his entourage.