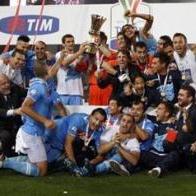 Napoli handed Juventus their first defeat of the season as a 2-0 win gave the Naples side their first silverware in 22 years.

Edinson Cavani broke the deadlock after just over an hour’s play from the penalty spot before Marek Hamsik made certain on the counter-attack with seven minutes remaining.

Substitute Fabio Quagliarella’s straight red card in the final minute of regulation time for an elbow to the face of Salvatore Aronica added further misery on the first blemish on the Old Lady’s 2011-12 record and club legend Alessandro Del Piero’s final game for the club.

Napoli coach Walter Mazzarri may well lose the likes of Cavani and Ezequiel Lavezzi in the summer, but the Coppa victory ensures they go out with a winner’s medal – the Naples outfit’s first success in the tournament since 1987.