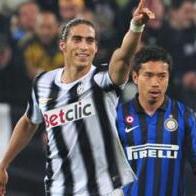 Martin Caceres and substitute Alessandro del Piero found the net as Juventus closed the gap on Serie A leaders AC Milan to four points after a vital 2-0 victory over Internazionale at the Juventus Stadium.

Both sides spurned clear chances in a captivating first half, but the deadlock was eventually broken when Caceres exploited Inter’s poor marking to head in Andrea Pirlo’s corner.

Juve veteran Del Piero then came off the bench to net the second, latching onto Arturo Vidal’s incisive through ball to drill a low effort inside the near post.

Mourinho : I Will Never Work For FC Barcelona!