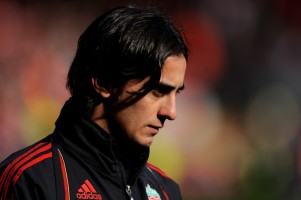 Interesting news are out and it has been reported that Alberto Aquilani is facing the exit door at Liverpool.

The Italian midfielder, now age 25, had a horror debut campaign at Anfield after a £17million move from Roma.

He arrived as a crock after ankle surgery, only made his debut in late October and started just THIRTEEN games all season.

Now the Reds, who will offload a host of fringe players this summer, are considering whether to make him the highest-profile departure of all.

Juventus have previously expressed an interest in taking him back to Serie A – and believe they could get him for a cut-price £10m.