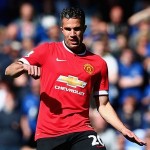 It has been reported that Juventus are closing in on a deal for Manchester United striker Robin van Persie.

The Mail on Sunday claims that Juventus, who have given United old boys Carlos Tevez and Patrice Evra a new lease of life this season, have been encouraged in their pursuit of the 31-year-old former Arsenal striker.

There is a belief that Louis van Gaal may not see him as first-choice next season.

However that hasn’t put off Italian champions Juve, who meet Barcelona in Berlin on Saturday for the biggest prize in European club football.

They hit the jackpot by signing Carlos Tevez and Patrice Evra in the autumn of their careers and both have played a big part in their bid for the Treble.