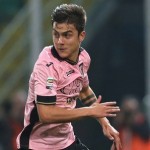 Reports are out claiming that Juventus remain in the hunt for Palermo striker Paulo Dybala.

The Argentine striker is a target for Arsenal and Manchester United as Palermo president Maurizio Zamparini prepares to sell.

But Juve remain keen and willing to go to €30 million for the Argentine.

Zamparini is insisting on €40 million to sell Dybala, but with less than 18 months to run on his deal, that valuation may need to be reassessed.

Juve intermediaries are convinced the Palermo president will eventually accept €28-30 million this summer for the striker.