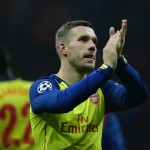 Reports are out claiming that Juventus are ready to make a move for Arsenal attacker Lukas Podolski.

The Italian giants made an attempt to sign Podolski over the summer after the World Cup and is ready to try again.

TMW says Juve hope to take the Germany international on-loan in January for the remainder of the season.

Podolski has impressed when called upon this season, but is frustrated over the lack of action he’s seen.

The attacker has stated he wants talks with Gunners boss Arsene Wenger over his situation ahead of the January market. Messi : Fabregas Would Be Fantastic For Barcelona