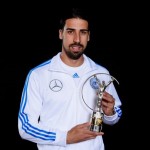 The German international star comes off contract next month.

Italian media sources claims that Khedira’s agent has spoken to Juve and told the club his client is open to a transfer.

A series of injuries and some forgettable performances have restricted Khedira to just 628 minutes this season over 17 appearances; 11 in the league, three in the Copa del Rey, two in the Champions League and one at the Club World Cup. Kaka Determined To Prove Himself At Real Madrid