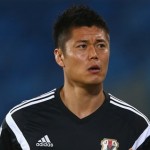 It is said that the Italian giants are in the hunt for a new keeper signing as they seek reliable cover for senior No1 Gigi Buffon.

TMW reported that Juve had scouts posted to see Standard Liege No1 Kawashima in action against Zenit St Petersburg this week.

The 31 year-old has been with Standard for the past two years and in Europe for the last four.

Kawashima is now inside the final year of his current deal.