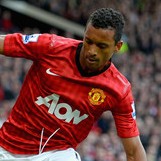 It has been reported that Manchester United’s interest in Porto star James Rodriguez has sparked interest in Nani from across Europe.

The Mirror says reports suggest Juventus have now joined AC Milan in the chase for his signature.

The Serie A sides believe they can sign the inconsistent winger for a cut-price £12million after United stalled on offering him a new contract and he rejected a move to Zenit St Petersburg in the summer.

Despite having made over 200 appearances for United since joining in July 2007, Nani has struggled to earn a regular spot in Sir Alex Ferguson’s first team this season.