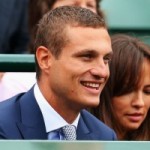 The Serbian centre back is a favourite of Juve GM Beppe Marotta and Tuttosport says he’s willing to wait until next summer to bring the Serb to Italy.

The defender has struggled with injury over the past two seasons and talks over a new contract are yet to open.

Vidic penned a four-year deal with United in 2010.

Juventus Pleased With The Progress Of Paul Pogba