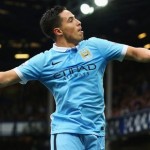 Reports are out claiming that Juventus are making a bid today for Manchester City midfielder Samir Nasri.

The Mirror claims that Juventus are keen to sign Nasri from Manchester City following the £54million capture of Kevin De Bruyne – but the Frenchman does not want to leave.

But De Bruyne’s arrival means he is seen as a squad player with Raheem Sterling and David Silva also ahead of the former Arsenal star.