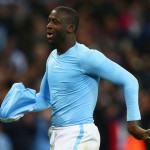 Reports are out claiming that Juventus are eyeing Manchester City veteran Yaya Toure.

The Ivorian’s agent, Dimitri Seluk, has declared Toure will leave City at the end of the season. He could even buy out the final year of his contract, says Seluk.

Toure is admired at Inter Milan, but their interest has waned in recent weeks.

The Bianconeri would prefer taking Toure as a free agent.

Samir Nasri On The Verge Of Joining Manchester City