Reports are out claiming that Juventus have Manchester City midfielder Samir Nasri in their sights. 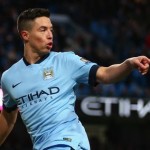 RAI reported that Juve will move for the former Arsenal midfielder should the Italian giants fail to sign Julian Draxler (Schalke) or Mario Gotze (Bayern Munich).

The Champions League finalists are on the hunt for a playmaker to flit behind their strikers and are currently keen on the German pair.

But if neither of those deals come off, then Juventus are keen on Henrikh Mkhitaryan, of Borussia Dortmund, and Nasri to fill the gap.