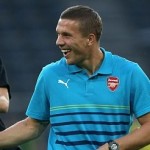 Marotta has been encouraged by Podolski’s latest outburst after being frozen out for Saturday’s defeat to Manchester United.

“I do not like the situation that has arisen. I love London and the club, but I’m not a fool, I want to play, and now I have to try to talk with (Arsene) Wenger to tell him,” slammed Podolski.

Juve’s interest is clear, with Marotta attempting to sign the Germany international in August.

But the Gunners refused to consider Juve’s loan proposal – insisting Podolski would only leave for a €15 million sale.

Marotta is ready to try again in January – but won’t shift on their original loan proposal.