It has been reported that Juventus are planning a January bid for Liverpool fullback Glen Johnson. 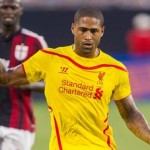 The Mirror reported that England international Johnson is on course to become a free agent at the end of the season but Juve believe they may be able to do a cut-price deal with the Reds and sign him in the next window.

Liverpool risk losing Johnson for nothing next summer but so far they have not reached agreement on a new contract.

But Juventus may find Johnson’s big contract a stumbling block. The 30-year-old defender is likely to want a big pay-day if he moves to Italy.