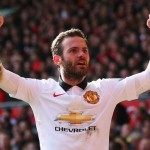 It has been reported that Manchester United midfielder Juan Mata is interesting Juventus.

Sky Italia claims that the Italian giants will move for Mata if they lose Carlos Tevez to Boca Juniors this summer.

Tottenham are also thought to be interested in Mata for £18m.