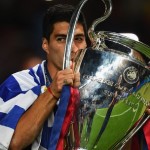 It has been reported that Barcelona striker Luis Suarez insists Juventus made them “suffer” after winning the Champions League.

The Uruguay international struck crucially in the 3-1 win.

The former Liverpool striker said : “Winning the Champions League is something I’ve only ever dreamed of,”.

“To win these tournaments you have to suffer, otherwise you won’t succeed, and we did that.

“Juve equalised after pressing a little more and had chances, but we have players who make the difference, and they put us back ahead.

“We always wanted to better our objectives. La Liga became the Copa del Rey final and now we have the treble.

“Humility and our togetherness throughout the season [is the key to our success].” Tiago : We Must Not Be Afraid Of Barcelona!