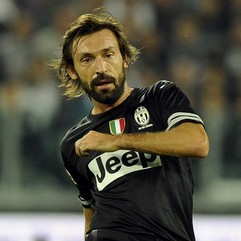 It has been revealed that Juventus veteran Andrea Pirlo will not rule out a career swansong in England.

Pirlo has come close to joining Chelsea and Manchester City in the past.

“Maybe, who knows?” he told the Daily Mail.

“I don’t know what might happen. You never know. I still have two years left with Juventus, this season and next.

“I like English football a lot. There are plenty of very good teams. They are very aggressive so it’s always entertaining to watch.

“It wouldn’t be a problem for me fitting into that particular style because I’ve played with different players with different characteristics throughout my career.”

Asked about his favourite English team, Pirlo replied: “It used to be Manchester United and then Chelsea when Ancelotti was there. Now it’s Manchester City because they have an Italian coach in Roberto Mancini.”