It has been reported that Juventus midfielder Arturo Vidal has told friends he expects to move to Manchester United this month. 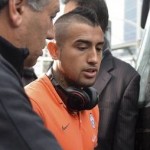 The Chile international is currently in Australia with Juve’s squad.

The Daily Star reported that opening negotiations have begun on a deal worth around £45m, with Juventus chiefs now willing to do business if their asking price is met.

It follows the news that Old Trafford bosses want Vidal to prove there are no problems with his long-term fitness and have asked for a medical to be completed before agreeing the fee.

The 27-year-old is now expected in the north-west before the end of the week when United doctors will pay special attention to the cartilage problem that required surgery in May.

Vidal however has told friends he is keen on completing a move this summer to the fallen Premier League giants and will surely prove to be the deciding factor in upcoming negotiations if all goes well with the tests.