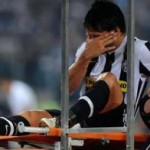 Bad news for all Juventus fans as Brazilian playmaker Diego will miss the Champions League opener at home to Bordeaux with a hamstring injury.

The Brazilian international midfielder, in fantastic form since his close-season move from Werder Bremen, was injured in the first half of Saturday’s 2-0 Serie A win at Lazio.

Juventus initially feared that the problem could be serious but a statement on their website said that the player would return to action in a week.

However Diego will now will miss Saturday’s league game at home to Livorno.

Alessandro Del Piero, Zdenek Grygera, Mohamed Sissoko and Hasan Salihamidzic are injured too and will sit out the Group A clash against the French champions.

Centre back Giorgio Chiellini is suspended.

Defender Jonathan Zebina was named in the squad after recovering from a nagging heel problem.