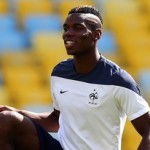 It has been reported that Juventus midfielder Paul Pogba has been named the World Cup’s best young player.

Antonio di Natale Happy He Stayed On With Udinese