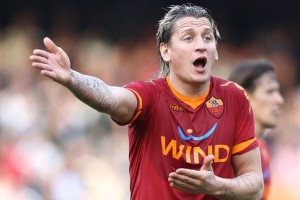 Interesting news are out and it has been reported that Roma are seeking players in talks with Juventus over the sale of Philippe Mexes.

The France international defender is up for sale at Roma with less than a year to run on his contract and has now emerged as a top target for Juventus GM Beppe Marotta.

It is believed that Roma are seeking €10 million for the defender while Juventus are reluctant to pay outright cash and instead are discussing player swaps with Roma.

It is reported that Roma coach Claudio Ranieri would like Juventus midfielder Momo Sissoko, having signed the former Liverpool star while in charge of the Bianconeri.

Juventus however does not want to lose Sissoko and instead have offered Christian Poulsen and Zdenek Grygera to AS Roma.

AC Milan are also interested in Mexes, but do not have the cash available to meet Roma’s valuation.