It has been reported that Juventus are ready to go back to PSG in January to further boost their midfield. 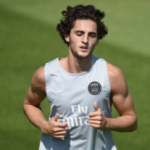 After the instant success of Kingsley Coman, Juve have now joined the battle for former PSG teammate Adrien Rabiot.

The youngster saw offers from Arsenal and AS Roma turned down over the summer – and will be free to commit to a pre-contract with a foreign club from January 1.

However, Tuttosport claims that the Italian giants are willing to sign Rabiot during the winter market and keen to do business with PSG over a swap deal.

With fullback Stephane Lichsteiner also inside the final year of his current deal, Juve hope to convince PSG to part with Rabiot by offering the Swiss in the straight swap.