Reports are out claiming that Juventus are prepared to sell Arturo Vidal at the end of the season. 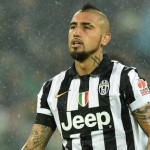 The Daily Express revealed Juventus have warned Manchester United target Vidal that he will be sold at the end of the season unless his performances dramatically improve.

The Chile international came close to joining the Red Devils during the summer after Louis van Gaal tabled a bid of around £40million.

However, Vidal turned down the opportunity to move to Old Trafford, but has failed to hit the same heights of last season in Turin.