Reports are out claiming that Juventus are preparing a bid for Manchester City attacker Stevan Jovetic. 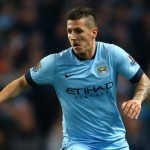 Goal.com suggests that the Bianconeri are willing to offer around £2million to take the Montenegro international on loan for the remainder of the season.

It is also believed that if the loan were to go well, Juventus would then pay £16.4m for a permanent transfer.

However, Manuel Pellegrini is adamant that Jovetic will not be going anywhere this winter despite the fact that City bought Wilfried Bony from Swansea City for £28m this week.