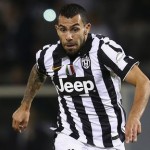 It has been reported that Carlos Tevez is ready to extend his deal with Juventus.

The 30 year old Argentine international striker is currently tied until 2016 and has been linked with a return to Boca Juniors.

However, Ole reported that Tevez is keen to continue in Italy and talks over a new two-year contract extension to 2018 are about to kickoff.

Juve president Andrea Agnelli and GM Beppe Marotta are due to soon meet with Tevez’s agent to discuss terms.

The former Manchester United and Manchester City striker does maintain he intends to eventually wind down his career at home with Boca.