Reports are out claiming that Juventus GM Beppe Marotta has hinted at new contract talks with Carlos Tevez. 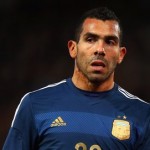 The former Manchester United and Manchester City star has spoken of returning home to Argentina.

The 30 year old has become a key figure for Juventus and his goals earned him an Argentina recall after three years.

“He is one of the best strikers in the world. As long as he wants to stay, the doors will be open,” said Marotta.