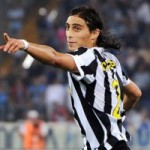 Italian side Juventus are reported to be still interested in Barcelona defender Martin Caceres.

The Uruguay international defender enjoyed a successful loan at Juventus last season and would be happy to stay in Turin.

However Juventus wants Barcelona to drop their €12 million valuation of the talented youngster.

El Mundo Deportivo says Rafa Benitez’s Inter Milan is also interested in Caceres, where he would be groomed as a long-term successor for Marco Materazzi.

Caceres’ situation is expected to be settled in the coming days now that Sandro Rosell has been installed as new Barca president.