It has been reported that Juventus coach Massimiliano Allegri is already designing his new season team WITHOUT Arturo Vidal. 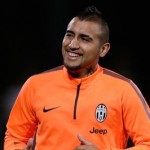 Corriere dello Sport revealed that Vidal’s agent, Fernando Felicevich, has been in England this week for talks with United and he’s convinced manager Louis van Gaal to move for his client.

It is said that Vidal has already agreed personal terms with United over an €8 million-a-year package and after speaking with Felicevich, Van Gaal has given the green light for United to bid €60 MILLION to bring the 27 year-old midfielder to Old Trafford.

Allegri accepts the deal will happen, even though the deadline is drawing near.

The new Juve coach has been working with his assistants building a system for the coming campaign without the Chilean midfielder.