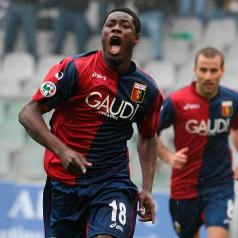 It has been revealed that Manchester United face competition from Juventus for Genoa striker Yiadom Richmond Boakye.

The 18 year-old Ghanaian is a confirmed target for the Premier League champions, which have been watching his progress on-loan at Sassulo this season.

However, Boakye’s form has also attracted interest from Juve.

Indeed, the Bianconeri plan to make an early bid to test Genoa’s resolve over the teen.