It has been reported that Juventus hero Mauro Camoranesi is backing their move for Udinese midfielder Juan Cuadrado. 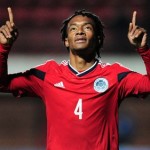 The 26 year old Colombian international is also linked with Premier League side Arsenal and is set to be signed outright by Udinese from Fiorentina.

“I’d like to see Cuadrado in that team,” Camoranesi told Tuttosport.

“I think Cuadrado is one of the strongest wide players around.

“He would be a great player for Juventus, that’s for sure.

“He’s much better than I ever was. He has so much quality, is lightning quick and can do his defensive duties as well.

“I think he would be ideal for Juve.

“But of course, I’ talking theoretically – I don’t know what either club is thinking.”