Reports are out claiming that Juventus midfielder Arturo Vidal is desperate for Manchester United to revive their interest in him. 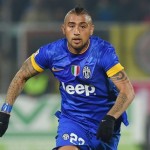 Calciomercato.com reports Vidal is hoping United revive their interest from last summer in to the coming one and make Juventus an offer they can’t refuse.

The Chile international resisted enquiries from United last season to stay with Juve, but the decision has since turned sour.

Vidal is no first-choice under coach Max Allegri and is now seeking a fresh challenge.