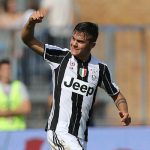 Paulo Dybala has revealed that he is close to signing a new Juventus contract.

The striker struck his first goal of the season last week.

Dybala is now being linked with a move to Barcelona, but he insists he’s happy in Turin.

“What the papers say about Barcelona is senseless. The market is closed and I am close to a contract renewal with Juventus,” he said.