It has been reported that Juventus have tabled an improved offer for Real Madrid striker Alvaro Morata. 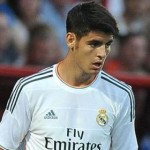 AS reported that Juventus are refusing to give up in their bid to sign the Spanish youngster, and have raised their offer for the Real Madrid man to €18 million.

This represents a €3 million increase on the Italian champions’ previous bid, which already included the buy-back option demanded by Madrid.

Premier League club Arsenal have also expressed their interest on signing the Spanish U21 international star.