It has been reported that Juventus are ready to drop their pursuit of Schalke midfielder Julian Draxler. 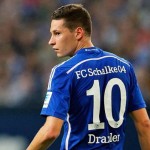 Juve and Schalke have been haggling over a price for the 21 year old German international for a fortnight, but an agreement is still not close.

However, for any deal to happen, the former Arsenal midfielder would have to accept a pay-cut on his City wages.