Reports are out claiming that Juventus are lining up a swoop for unsettled Manchester City centre-back Matija Nastasic. 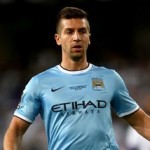 According to the Daily Star, Italian champions are keen to add one more defender to their ranks before the new Serie A season begins.

It is said that Juve sporting director Beppe Marotta has made Nastasic his No.1 target and is hoping to negotiate a 12-month loan deal.

The Serbia international emerged as one of the brightest defensive prospects in Europe after joining the Premier League champions in 2012 from Fiorentina for £10m and has been linked with a move to Arsenal.

He looked to have established himself at the heart of City’s defence before suffering a succession of injuries last season.