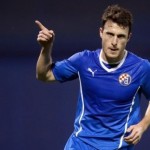 Reports are out claiming that Juventus are watching Manchester United striker Angelo Henriquez leading up to the summer market.

The Chile international is starring on-loan with Dinamo Zagreb this season, scoring 20 goals in 29 games.

Calciomercato.com reported that Juve are keeping tabs on Henriquez’s form and weighing up a move for the centre-forward.

Henriquez’s agent, Fernando Felicevich, also takes care of Juve star Arturo Vidal and has a good relationship with the Bianconeri.

His deal with United is due to expire at the end of the season.