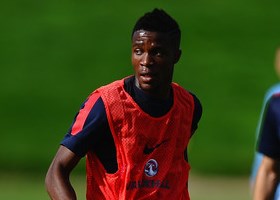 Interesting transfer news are out claiming that Juventus are taking a close look at Manchester United winger Wilfried Zaha.

It is said that the Italian giants were impressed by Zaha in England U21 action this past week and Turin media sources say they’re weighing up a loan move for the midfielder in January.

United boss David Moyes has already made it clear he thinks Zaha is benefiting from his time at the club. Rooney Should Not Be Leading Man Utd Attack – Jenas