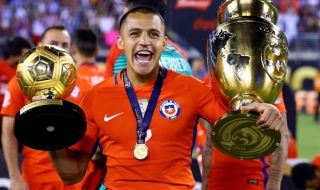 JUVENTUS have upped the stakes in their pursuit of Alexis Sanchez by offering Arsenal target Miralem Pjanic in exchange, according to reports in Italy.

The super Chilean has yet to sign a new deal at the Emirates, and there are growing concerns he may be seeking a move away from North London.

The Turin-based newspaper says the Old Lady is dreaming of matching Sanchez with Paulo Dybala and Gonzalo Higuain in an attacking trident to match the likes of Karim Benzema, Cristiano Ronaldo and Gareth Bale at Real Madrid and Neymar, Lionel Messi and Luis Suarez at Barcelona.

The Bianconeri are on course for a sixth successive Serie A title — and spent £75million in the summer on strengthening their attack with the signing of Gonzalo Higuain.

However, while they are still in first place, Max Allegri and his players have already lost four times in the league, and it is only the inconsistency of their rivals that should see them over the line at the end of the season.