It has been reported that Juventus are listening to offers for Arturo Vidal in January. 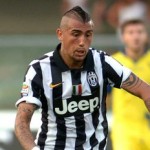 The Daily Star revealed that sources in Italy claim the Serie A giants are willing to accept £27.8m for the former Bayer Leverkusen star, who is also wanted by Real Madrid.

These reports surfaced just days after the club disciplined him for his alleged involvement in a scuffle outside a Turin nightclub.

The club fined Vidal £78,000 and dropped him for their 3-2 victory over Roma last weekend, but it seems that they’ve had enough and are keen to get rid of the coveted midfielder.

Vidal is high on the shopping list of Manchester United boss Louis van Gaal ahead of the January market.