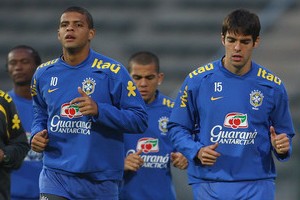 Real Madrid midfielder Kaka has had a bust-up in Brazil training with Juventus midfielder Felipe Melo.

It is reported that the clash occurred during their training at the Randburg High School.

Felipe Melo came in with one of his crunching tackles and this dangerous challenge infuriated Kaka, who remains concerned over his injury problems suffered last season.

The Real Madrid star, formerly of Milan, would not hear his attempt at an apology and stormed off the field.

The newspaper alleges that Selecao directors intervened to calm the situation. Fernando Torres Hoping To Break Back Into Spain Squad