According to Kaka, Real Madrid will not let Karim Benzema leave the club easily. 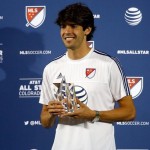 The former Madrid star, now with MLS side Orlando City, suggests that the French international striker is the type of player that a club like Real would not be looking to offload.

Arsenal are being heavily linked with a move for the 27-year-old but former teammate Kaka is not so sure the Gunners will simply be able to land his signature.

“I think Benzema is one of the best forwards at this moment so I don’t think Real Madrid will give him away so easily,” the Brazilian great told talkSPORT. Bilic Admits Andy Carroll Could Have Been Benched For Arsenal Clash