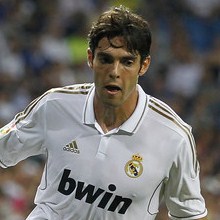 Real Madrid midfielder Kaka has declared that he is fully committed to club and not thinking of leaving.

Before his goal scoring Champions League performance this week, Kaka had been linked with Arsenal and PSG.

The Brazilian international said : “No, I never thought of leaving,”.

“The coach called me after the match against Villarreal and wanted to know the situation. I told him I did not want to go and that I would not leave. Then I spoke to Florentino and he said they did not need to sell.

“I’ve always had the dream to succeed here.”