Reports are out claiming that AC Milan attacker Kaka is disappointed to have been overlooked for Brazil’s provisional World Cup squad.

The 32 year old’s omission came as a surprise for many. 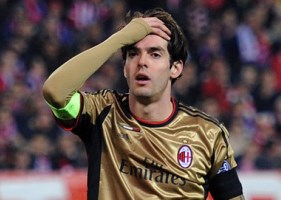 The former Real Madrid star told Sky Sport Italia : “It’s a pity, but I am not sad because I did everything I could,”.

“Scolari has always been consistent and made his choices. He hadn’t called me recently, so it would’ve been a surprise to be included. Robinho took the decision the same way I did, we gave it our all to go to the World Cup, but Scolari made other choices.

“I think the favourites for the World Cup are Brazil, Spain and Germany, followed by Italy, Argentina, England and Portugal. I am convinced Mario Balotelli will have a great tournament.” AC Milan Delighted With The Preseason Form Of Keisuke Honda