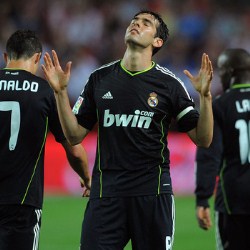 Real Madrid play-maker Kaka has declared that he intends to stay with Real Madrid and repay the faith coach Jose Mourinho showed him during his injury-plagued last season.

The Brazilian international star is reportedly determined to meet the expectations of fans after a difficult two years in Madrid.

The former AC Milan star said : “I know I have not met the expectations of the fans and the press, but also I have not met mine. I wish and hope to do much better at Real Madrid. All is a matter of trust. From the moment I win the confidence of the coach, I’m sure I’ll play regularly,”.

“What has happened during these two years in Madrid is that I have not reached my physical, technical and psychological best. But that part is my fault. And, unlike what is said, Mourinho has helped me a lot.

“It is said that Mou does not want me in Madrid, but it’s not true. He has always been very honest with me, consistent in his decisions about me and the team in general. I can only be grateful.

“My desire is to continue at Real Madrid. Before coming to Brazil, Mourinho and the leaders told me to have a quiet holiday, I hope in preseason I can do well. I knew there would be speculation because since I arrived at Madrid, I have been associated with ten teams.

“But I want to continue and I will stay.”