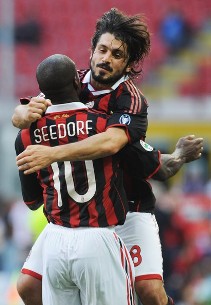 The fit-again Italian international midfielder has been linked with Manchester City and Chelsea after admitting frustration over the lack of regular action he’s seen this season.

Kaladze however is urging the management to do all they can to calm the situation.

The Georgia international defender told reporters that Gattuso is like a brother to him and that he knows how Gattuso feels in certain situations and that AC Milan should not be relaxed.

Kaladze then said that if Gattuso gets nervous, he will never back down.

However the defender also said that Gattuso knows that he is a leader for the team, and that if he plays well, the rest of the players play well.

Kaladze then said that for Gattuso to leave AC Milan would not be a good thing.